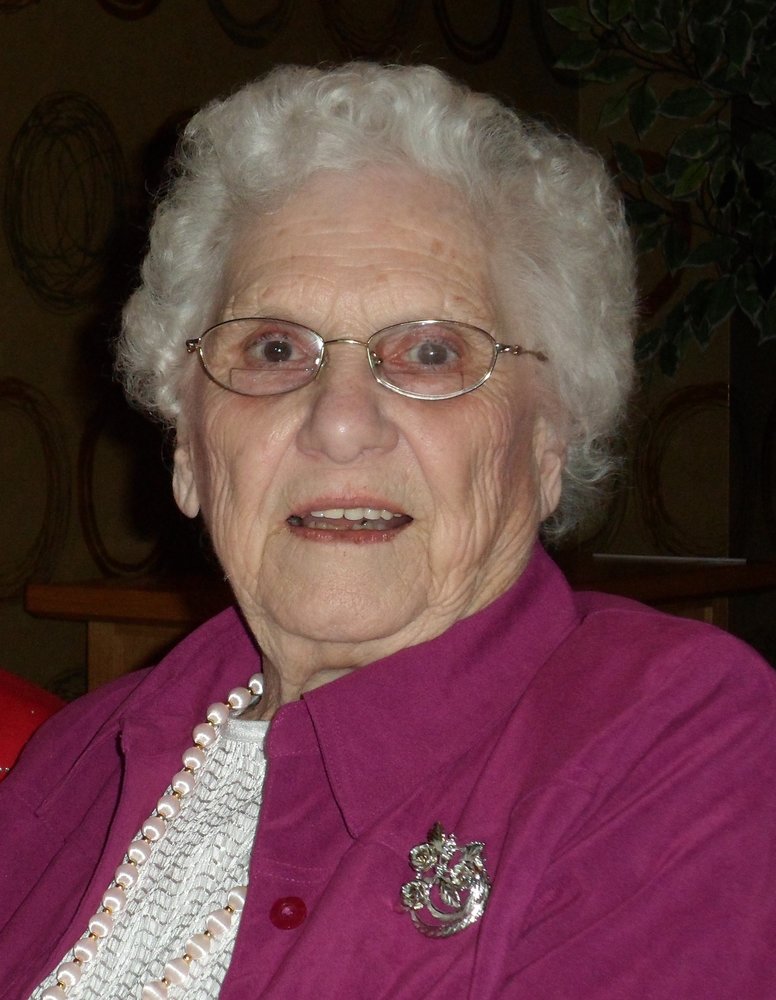 “Our hearts still ache with sadness... we knew you have to go. But what it cost to lose you, no one will ever know”

Mary Jane blessed us as a mother, teacher, mentor and most of all a role model for over 95 years.

She was born in Dover Township, eldest daughter of Esdras and Maria (Lucier) Mallette. Our mother was always graceful and courageous through the difficult moments in her life. Her own mother died a young woman leaving six children to be loved by their father. He was a dedicated single parent who encouraged his children to pursue education. Mary Jane graduated Grade 13 in 1944 and entered Teacher’s College in London. In August 1946, she accepted a teaching position at S.S.# 3 Zone Township, located one concession behind the Herbert Farm.

On the warm summer day of August 15, 1950 she married Gerald Elvin Herbert (October 2, 1920 – June 19, 2003) at St. Paul Catholic Church, with a reception at the Thamesville Hotel. They travelled to Banff Alberta for a honeymoon. Our parents were together for over 62 years and provided us with a loving environment on the Herbert Dairy Farm, Florence Rd. Chatham Kent, Ontario. It was the best place to learn about honest work, commitment to each other, a love of animals, and best of all lots of room to explore. And for three generations the children have enjoyed grandparents across the laneway! The Herbert Dairy Farm was a welcome place for family and friends.

For five years, Mary Jane enjoyed the position of teacher in a one room school and will be remembered by many of her former students. In June 1951, with no government rules about equality in the workplace, a woman was not encouraged to continue as a teacher during pregnancy, so Mary Jane made the decision to enjoy the role of full time mother.

During 1964 – 1974, Mary Jane was the Leader of the North Thamesville 4-H Homemaking Club. There are many women who will remember as a young girl, the fun of learning with the 4-H Club.

In the early seventies, Mary Jane decided to return to college and completed a course in Geriatric Care and was employed in Long Term Care facilities in Thamesville , Ridgetown and Blenheim.

Our father and mother enjoyed many years of travel and were always riding on the Badder Bus with McDonald Tours. So many places, pictures, and memories were shared with family and friends.

Mary Jane is a lifelong supporter to the St. Paul Catholic Women’s League and the North Thamesville Women’s Institute.

When extra care for our momma became a priority, she chose to move into Riverview Gardens in Chatham, and she simply flourished with the care of the “angels” on the second floor. She laughed with them and loved them. The staff encouraged her to participate in many activities even while confined to a wheelchair, due to the long term effects of diabetes. Her entire family thank all of you from the bottom of our hearts for making these years so wonderful for ``MJ`` with your kindness, thoughtfulness, and caring.

Aunt Mary Jane will be remembered by13 nieces and nephews who have been regular visitors at The Herbert Dairy Farm and at Riverview Gardens.  “

Our parents left us with a legacy of strength, commitment, support and lots of love for which we will be forever grateful. The legacy will continue through the grandchildren and great grandchildren who will continue to demonstrate the courage and grace learned from family.

Momma, Grandma, Great Grandma, Aunt, and Sister...you are the kindest, loving, most gracious lady we’ve ever met and we are so privileged to be your family. We will carry you in our hearts forever.

The Herbert Family will receive relatives and friends at the John C. Badder Funeral Home, 72 Victoria Street, Thamesville on Sunday from 2:00-4:00 & 7:00-9:00 p.m. with Parish Prayers at 6:45 p.m. A Funeral Mass will be celebrated on Monday, September 23, 2019 at St. Paul's Catholic Church, 9 Alice Street, Thamesville at 11:00 a.m. with Fr. Doss Velagnni as celebrant. Interment to follow at St. Paul's Cemetery. In lieu of flowers, memorial donations may be made by cheque to the Diabetes Association or Charity of Choice. Online condolences may be left at www.badderfuneralhome.com.

Share Your Memory of
Mary Jane
Upload Your Memory View All Memories
Be the first to upload a memory!
Share A Memory
Send Flowers