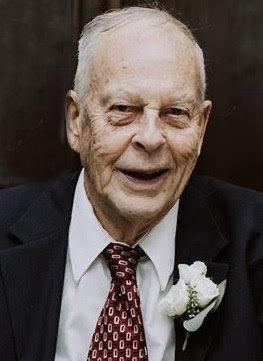 At Ted's request there will be no visitation or funeral service. A private Family Interment will be held at a later date in Gosnell Cemetery, Highgate.

Throughout Ted's life, he was a true outdoorsman and loved spending time fishing, hunting, trap shooting, and taking his family on nature walks. After retirement, his strong will for adventure and enthusiasm for life continued. Ted discovered a passion for flying and received his pilot's license at the age of 65. He met new friends and went on several trips across North America attending air shows and discovering new places. Ted often flew through the wide-open skies of Chatham-Kent: “if you looked up and it was red, it was Ted."

When he wasn’t flying, Ted was spending time making memories with his family, friends and neighbours. Ted enjoyed hosting backyard gatherings on Bedford Street and travelling to destinations in the warm south.

Ted was a loving husband, father, uncle, grandpa and great grandpa. He will be missed greatly by all who knew him.

The Challis family would like to extend their sincere appreciation to the Chatham-Kent Hospice team, especially Meaghan, Allison,  Shannon and Connie as they have brought great comfort to our family during Ted’s residential stay.

Those wishing to leave an expression of sympathy are asked to consider the Chatham-Kent Hospice or the Duchenne Muscular Dystrophy Foundation.

At Ted's request, cremation has taken place. A private family graveside service will be held at Gosnell Cemetery at a later date. Arrangements entrusted to the John C. Badder Funeral Home, Thamesville.

Share Your Memory of
Charles "Ted"
Upload Your Memory View All Memories
Be the first to upload a memory!